We’ve all seen them!  They’re quite prevalent in our catchment.  They are large, colourful spiders suspended in impressive orb webs which seem to catch the sun’s rays – and which also catch your eye as you’re wandering past!

These are the Golden Orb Weavers.

Ed Frazer took a number of photos of Golden Orbs on his property. We consulted with Robert Raven, a respected arachnologist with Queensland Museum, to identify the spiders.

Robert advised that Golden Orb spiders are of the genus Nephila.  He identified the spiders in Ed’s photos as being one of either two species which occur in our area: Nephila edulis or Nephila plumipes.  The primary difference between the two is a cone that occurs on the sternum near the mouthparts.

Golden Orbs are virbrantly coloured, often with black and orange banded legs. The females are larger than the males. Their nests are generally placed between trees and shrubs, well above the ground and often littered with dead insects.

There is a wealth of information about Golden Orb Weavers on the web. If you’d like to learn more, Robert suggests visiting the Queensland Museum website.

Meantime, please enjoy Ed’s photos and stop and take a look next time you see similar spiders in your own travels! 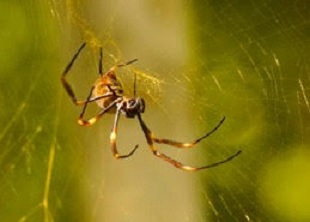 The next two shots are of males: 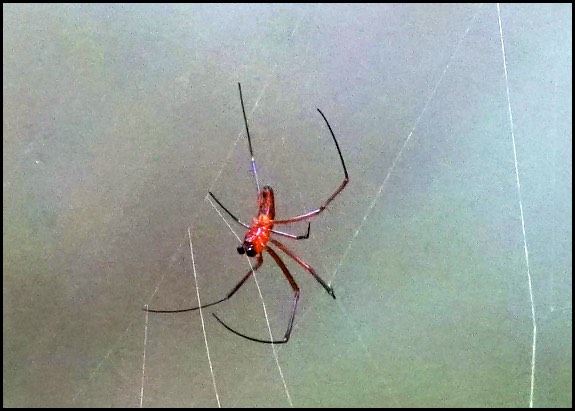 There is a male and female in the next shot (the smaller male is in the top centre of the photo, silhouetted against the tree):